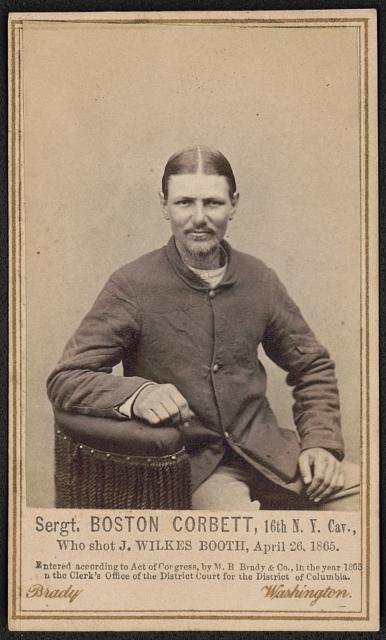 History is fickle. What people remember, choose to write about, or emphasize for that matter often overlooks the truly remarkable.  April 1865 was a roller coaster of a month for the United States. On the 9th of April General (CSA) Robert E. Lee surrendered his Army of Northern Virginia to Lieutenant General Ulysses S. Grant (USA). On the 26th of April General Joseph E. Johnston (CSA) surrendered the Army of the Tennessee to Major General William T. Sherman (USA). Even though these two armies combined represented over 80% of the total military strength remaining in the Confederacy, the joy was dampened by the intense anger and grief felt by the nation over the April 14th assassination of President Abraham Lincoln (Winik, 2001). One of the most focused man hunts in history lead to the cornering and killing of John Wilkes Booth, the man who fired the fatal shot into the back of Lincoln’s head (Swanson, 2006). Although, almost every school child from fifth grade to 12th grade can tell you who killed Lincoln, very few know the name of the man responsible for killing Booth.

Thomas “Boston” Corbett was a member of the 16th New York Cavalry which had cornered John W. Booth in the pre-dawn hours of April 26, 1865. During the standoff one of Booth’s conspirators was captured alive but Booth insisted that he would not be taken alive. In an attempt to smoke him out, the barn, where Booth was hiding, was set on fire (Kauffman, 2004). Sergeant Corbett took aim at Booth through slats in the planking around the barn and fired his weapon. The bullet entered Booth’s neck and severely damaged the spinal cord. He would die just before sunrise on the same morning (Weichmann, 1975). Although many applauded the actions of Sergeant Corbett, he was immediately brought up on chargers for disobeying orders. But since it could not be proven that he had actually violated any orders, he would later be pardoned by the Secretary of War Edwin Stanton (Swanson, 2006).

Prior to the Civil War, Thomas “Boston” Corbett was an English immigrant who became a hatter (person who makes hats, I know it’s obvious but it is a profession that is no longer in our vernacular). Shortly after starting a family his wife and daughter died (Kauffman, 2004). He moved to New England and fell into a deep depression. It was during this time he had a spiritual awakening with a sect of Methodists in the town of Boston. He changed his name to Boston in honor of the town where he came into contact Jesus Christ (Swanson, 2006). Corbett spent a great deal of time enthusiastically acquainting himself with his new found faith.  He grew his hair and beard in an imitation of his savior and even began preaching on the streets. One day he was approached by two women of ill repute and was tempted by their charms and felt himself moved so to speak (Swanson, 2006). Not wanting to fall victim to their wicked presence again, he went home made an incision in his scrotum and withdrew and cut off his tentacles with a pair of scissors (Swanson, 2006). Following the procedure, he went to a prayer meeting and then out to dinner. It was only after his scrotum swelled and turned black that he went the Massachusetts General Hospital for treatment where a medical doctor repaired what damage had been done (Kauffman, 2004).

Following his role in the killing John Wilkes Booth, Corbett had a hard time resuming his former profession and drifted from job to job. He became worried that his life was in danger from people sympathetic to Booth (Swanson, 2006). He ended up settling in Topeka Kansas and became a doorkeeper for the State legislature. His last known residence was literally a hole in the ground which is now a famous landmark in Kansas. In February 1887 he ended the session of the legislature at gunpoint over blasphemous language and was sent to a mental institution for the rest of his life (Kauffman, 2004). Corbett eventually escaped, and although imposers tried to draw on his pension, he disappeared and was not seen or heard from again.

It is very sad that not much is recorded about this man. He appears in footnotes and is briefly mentioned in the stories of the Lincoln Assassination but he does not appear in any of the numerous history text books I use in my classes. Though I’m sure that most evangelicals today would not advocate self-mutilation, they would however admire his commitment to his faith. Sergeant Corbett never sought out fame, was not in competition with is peers for promotion, was a surviving candidate for the Darwin Awards (removing himself from the gene pool), and he killed the man who executed one of the more visionary presidents of American history. This mad hatter had no redemption in his life. Afflicted by personal loss, post war jealousies, and his zealous beliefs he virtually disappeared not only from life but from history itself.

Weichmann, L. J. (1975). A true history of the assassination of Abraham Lincoln and of the conspiracy of 1865. New York, NY: Vintage Books.