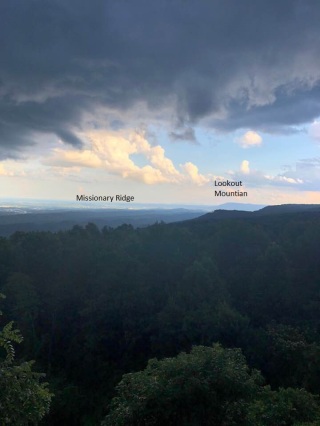 Walden’s Ridge, is a 74-mile-long prominence stretching from Moccasin Bend on the Tennessee River northeast to a gap in the terrain that runs diagonally between Crossville to Rockwood Tennessee. In the late summer and fall of 1863, this imposing ridge-line influenced the operations of two armies combining over 100,000 men. Though dotted with towns, county roads, and state highways today, during the Civil War Walden’s Ridge represented a daunting obstacle to any travel from west to east. As a retired combat engineer with an appreciation of the impact of terrain on military operations, Your Civil War Geek cannot ignore the immense importance of Walden’s Ridge to the overall success of Union operations during the Campaign for Chattanooga.

Without rehashing the entire Chattanooga campaign, this installment will provide an examination of the impact of Walden’s Ridge through the lens of a Combat Engineer. For 21 years, your Civil War Geek was a combat engineer. To the uninitiated, when historians mention combat engineers it is usually in reference to bridge building or finding landmines, but combat engineers do much more. Engineers shape the battlefield with obstacles and strategically placed openings, conduct reconnaissance, employ military explosives to create or reduce obstacles, and advise senior commander on the advantages and disadvantages of terrain. These fundamental missions have existed on a basic level since the 1800s but technically the capabilities of Combat Engineers have evolved astronomically since the corps was formed in the early days of the American Revolution.

To understand the importance of Walden’s Ridge one needs to understand how military engineers and commanders evaluate terrain. Modern field manuals refer to the acronym O.C.O.K.A. (Observation and fields of fire, Cover and Concealment, Obstacles (manmade and natural), Key or decisive terrain, and Avenues of approach). Regardless of the type of military operations wise commanders throughout military history have used these considerations when evaluating the usefulness of terrain in military operations. The Chattanooga campaign, is a prime example of the effective use of terrain by military commanders to turn a protracted siege into a victory for the besieged.

After Major General William S. Rosecrans’s successful Tullahoma campaign, he endeavored to press his advantage and defeat Confederate General Braxton Bragg’s army (Cozzens, 1996). After his inglorious defeat at Chickamauga in September, Rosecrans’s and his men were penned into Chattanooga (a city of roughly 6,000 inhabitants in 1963).  Confederate forces occupied an L shaped position around the city by securing the key terrain of Missionary Ridge on the east side of Chattanooga and Lookout Mountain due south and across the Tennessee River from Walden’s Ridge.

During the Siege of Chattanooga, the Confederates controlled the major railroads which supplied Chattanooga prior to the Siege. The sheer difficulty of navigating across Walden’s Ridge and the success of Confederate cavalry made retreat from Chattanooga untenable. The river route between Lookout Mountain and Signal Point (located at the extreme southern end of Walden’s Ridge) was affected by treacherous currents and lack of cover from Confederate artillery and infantry pickets. Confederates had the advantage of interior lines and a fully functioning and accessible railway network behind those interior lines. Rosecrans was almost completely cut off from his supply lines and unable to get his depleted forces across Walden’s Ridge. This was the Union situation in late September 1863.

Even today Walden’s Ridge presents a daunting obstacle to anyone who lives on Signal Mountain that also works in Chattanooga or Hixon. Anderson Road, (Anderson Pike) was the only major road on Walden’s Ridge in 1863 which would be recognizable to the contemporary traveler (Lardas, 2016). Today there are three main roads providing access to Walden’s Ridge from Chattanooga. On the south side is Signal Mountain Road and the W Road. Signal mountain road, is probably the easier of the arteries to Walden’s Ridge with its relatively gently winding switchbacks and scenic view including a house shaped like a flying saucer. The W-Road, a place where cars go to die, is actually situated diagonally across the east face of the ridge. The W-Road has switchbacks at both ends that resemble V-tach on a cardiac monitor and have a similar effect on the driver’s heart rate in bad weather. Northwest of Chattanooga is Robert’s Mill Road which is only slightly easier to navigate than the W-Road. All three of these roads are subject to weather closures, have numerous twist and turns. None of them were developed much beyond goat trails back in 1863.

After Rosecrans’s defeat at Chickamauga, Secretary of War Edwin Stanton had an emergency meeting with Grant in special rail car traveling between Indianapolis and Louisville (Grant, 1999). During that meeting, Grant received permission to assume command of forces operating in that part of Tennessee, relieve Rosecrans of his current command, and replace Rosecrans with Major General George Thomas. Thomas earned the nickname Rock of Chickamauga for his covering of the Union retreat (Cozzens, 1996). Grant made some quick adjustments to existing commands and then set off for Chattanooga. Grant’s approach to the city required him to cross Walden’s Ridge by horseback.

Grant’s trip across Walden’s Ridge is described in his memoirs.

“We then proceeded to Bridgeport, where we stopped for the night. From here we took horses and made our way by Jasper and over Walden’s Ridge to Chattanooga. There had been much rain, and the roads were almost impassable from mud, knee-deep in places, and from wash-outs on the mountain sides. I had been on crutches since the time of my fall in New Orleans, and had to be carried over places where it was not safe to cross on horseback. The roads were strewn with the debris of broken wagons and the carcasses of thousands of starved mules and horses.” (Grant, 1999 p.330-31)

After linking up with Thomas and his subordinate commanders in Chattanooga, Grant set to work re-opening the supply lines both from Sequatchie Valley by land and from Bridgeport Alabama by water. Collectively both of these supply lines were affectionately referred to, by  Union forces in Chattanooga, as the Cracker Line.

Despite the difficulty in crossing Walden’s Ridge with any sizable forces, the crest of the ridge could be occupied and made useful for an enterprising commander. The crest of Walden’s ridge is between 1800 and 2000 ft. above sea level. Missionary Ridge is roughly 1000 feet above sea level. Even with primitive optics an individual can see detail on both Missionary Ridge to the east and Lookout Mountain to the south. Grant established a signal station on what is now Signal Point (the smallest National Park in the United States). Corral Road which connects one end of Anderson Pike to Sawyer Pike today, was given its name because it was a staging area for horses, wagons, and mules in 1863.

In preparation for the battle of Chattanooga, Major General William T. Sherman would move his forces and pontoon bridges between Walden’s Ridge and the hills which now conceal the city of Redbank from Chattanooga. His assault on the Confederate right, Thomas’s assault on the Confederate center, and Hooker’s seizure of Lookout Mountain, resulted in Bragg withdrawing his demoralized army back into Georgia. By using and securing the imposing terrain of Walden’s Ridge, rather than writing it off as an impediment, Grant not only set the conditions for the Union’s success in lifting the siege, but he also denied the use of that terrain to the Confederate forces.

From Chattanooga, forces would be sent to re-enforce Major General Ambrose Burnside at Knoxville as well as Sherman’s assault on Atlanta.  Chattanooga, as much as any other Union victory, sealed the fate of the Confederacy. Had Grant not made use of Walden’s Ridge, or had Bragg secured it during the siege, outcomes for the war and the United States would have been drastically different.

Cozzens, P. (1996). The shipwreck of their hopes: The battles for Chattanooga. Urbana &