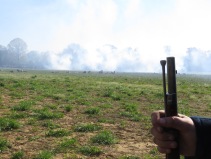 It was a chilly morning in April 1862, when a forward thinking officer by the name of Colonel Everett Peabody sent a patrol from the 25th Missouri to reconnoiter the area in front of his regiment’s position. Under orders not to be sucked into a larger engagement, Peabody had no idea that his skirmishers would be starting point for a battle that claimed more casualties that all other American wars combined up to that point in time. Nor did he realize that by the end of the war there would be over a dozen more conflicts with equal or greater casualties. Flash forward 155 years and two days later to Saturday morning April 8, 2017. We awoke from a brutally cold night of sleeping. The air temperature was 34 degrees and most of us were stiff and sore as we were roused from our fitful sleep. We donned our equipment and fell in for the march to a battlefield about a mile from our camp.

We arrived at the battlefield at 6-630ish in the morning and the lead regiment sent out skirmishers. Re-enactments rarely take place in the dark for safety purposes. As we went through the battle, I couldn’t help but think back to what it must have been like for Peabody’s green troops groping around in the dark unsure of what lay in front of them. As the battle unfolded we could see our skirmishers engaging the Confederate line coming out of the woods to our Southeast. 155 years ago Peabody’s men actually hit the leading edge of General Alfred Sydney Johnston’s Confederates.

We did not experience the level of confusion Peabody’s men would have encountered as we re-positioned, returned fire, and kept re-positioning. We eventually ended up where the cannons were positioned and we could experience some of the sounds and smells of the battle. The sickeningly sweet smell of the wildflowers mixed with the acrid sulfurous smell of black powder from our muskets created a unique assault on our senses.   As we stood online with our cannons, shoes and pant-legs soaked from the dewy grass we had been marching through all morning, we again gained a small understanding of the physical sensations of combat in the 19th Century.  The cannoneers did a good job of replicating the systematic, disciplined, and rapid reloading and firing of a unit being pressed by a superior force.

That morning battle ended as the script dictated and we marched back to camp. In camp, we had about an hour or so to clean our muskets, eat, and get water before we replicated how soldiers lived in camp in the 1800s. In a union camp (when not engaged in combat) the day was run by the call of the bugle and drums. You had morning parade (a fancy name for formation with inspections), you had drill, guard duty, picket duty, and officers had frequent meetings with regimental commanders. On this Saturday 155 years since the battle we replicated that life with an hour of drill to prepare us for the next battle. After drill, the day’s temperatures took a swing to the other end of the thermometer ending up in the mid 80s by noon. We had a brief respite after drill and then we were lined up for the next battle.

In 1862, the first day of the battle was calamitous for the Union. With green troops, untested commanders, and poor intelligence, the Union forces were pushed back to a horseshoe shaped defensive position where the present National Park’s visitors center and national cemetery is located. Individual battles and places earned iconic names such as the Hornet’s Nest, Sunken Road, and Bloody Pond. Fortunately for the Union two things happened which changed the pace of the fight. In the early afternoon General Johnston was hit by a musket ball in his popliteal artery, just behind his knee. He did not believe he was seriously injured at first and continued to direct the care of Union prisoners. In about 15 minutes the story was much worse. He had essentially bled out into his boot and died shortly after the severity of his wound was discovered. The second event that played into the Union’s hand was General PTG Beauregard’s assumption of command of the Confederates after Johnston’s death. Earlier in 1862, Beauregard had fallen out of favor with the Confederacy’s president Jefferson Davis and many subordinate leaders questioned his aptitude for command.

Back to in the 21st Century, our afternoon battle was marked by extreme heat, poor water supply, and organizational confusion which made the event last longer than the planned hour and a half. Like the morning battle, we had an intimate association with the sights and sounds of an 19th century battle. We saw artillery rapidly repositioned, men fall, and ranks break and reform. Almost three hours after the battle started we were back in our camp for very brief rest. Our group was tasked to re-create a Union patrol of a civilian town (called Purdy) harboring Confederate sympathizers. All of the civilians were re-enactors and they were very good at playing their respective roles. As it turned out the town’s pharmacist bragged to one of our solders that he was at the battle on the Confederate side of the lines. We were instructed to bring him in for questioning. The townspeople formed a ring around him and tried to move him to what they perceived as safety. We were ordered to fix bayonets, which did not phase them. This is where re-enacting breaks from reality. The civilian actors know that we are not permitted to use any real force especially with bayonets fixed, so they pressed into us more aggressively. We were given the command to unfix for safety sake. Mongo, our fearless First Sergeant decided to use his whit to try and defuse the situation by commenting “You sure have a Purdy (an alliteration for the towns actual name) town,”  at which point the suspect bolted for the nearby woods. Myself and two of my buddies Corporal Alex Bell and another who’s name escapes me, gave chase and we cornered him in the hollowed out roots of a tree by a creek bed. By the end of the encounter we were tired, irritated, and glad to be heading back to camp. We were given a break that night and our guard duty was deferred to the next morning since we had taken one for the team.

As I laid down to sleep that night, I thought of what it was like on the night of the 6th. Union soldiers were being rallied and reorganized as Buell’s reinforcements arrived. That evening there was a terrible thunderstorm (fortunately that wasn’t the case for 2017). In between the claps of thunder in 1862, the Union gunboats Tyler and Lexington bombarded the weary Confederates, depriving them of any substantial rest. The next day, with Buell’s re-enforcements and a change in the Confederate command, Grant and Sherman were able to secure a victory for the Union and drive the Confederates from the field. This would go down as one of the worst days for the Confederacy and marked a turning point for the war in the west.

In 2017 we gathered around our fires in the morning and we discussed how miserable we felt after a day with two battles, drill, and reindeer games with civilians in a mock town. We also discussed the realization that soldiers in the 19th century did this every day until they died, were severely wounded, or until the end of the war. Most of us agreed that Shiloh 2017 was one of the more difficult re-enactments we had attended but our miseries were of no consequence compared to the men that actually fought the battle. Despite this we managed to enjoy ourselves, enjoyed each other’s company, and gain a newfound respect for what those men endured 155 years ago.

I’d like to send out special thanks to my all of the men I had the privilege or re-enacting with from the Army of the Wabash. We always have a great time and you readily treat me like a family member even though I only get to see you once a year.